Singapore topples US as world’s most competitive economy

The UAE is ranked first regionally, and entered, for the first time, the top 5 globally in the IMD World Competitiveness Rankings.

The UAE has seen robust and continuous progress in its global competitiveness ranking over the past few years from a rank of 15th globally in 2016. The steadily rising global and regional performance is driven by both government and business efficiency, as well as technological and scientific infrastructure.

“We have embarked on the competitiveness journey 10 years ago and the UAE today is ranked first in the region and fifth globally. Competitiveness is an endless journey. leading and top positions go always for those who spare no effort to make landmark achievements and milestones,” said His Highness Shaikh Mohammad Bin Rashid Al Maktoum, Vice-President and Prime Minister of the UAE and Ruler of Dubai.

The UAE now ranks first globally for business efficiency, outshining other economies in areas such as productivity, digital transformation and entrepreneurship.

“We will not stop developing our national competencies, government services and infrastructure. We want the world’s best for our people and for all residents in the UAE,” said Shaikh Mohammad.

The IMD World Competitiveness Rankings, established in 1989, incorporate 235 indicators from each of the 63 ranked economies.

Globally, Singapore has ranked as the world’s most competitive economy for the first time since 2010, as the United States slipped from the top spot, while economic uncertainty took its toll on conditions in Europe.

“We are very optimistic and tolerant people. Our minds think, innovate and create and we work hand in hand to build our nation driven by our profound love for our homeland. The UAE people (Sons of Zayed) deserve the best and first ranks”, Shaikh Mohammad said.

The IMD World Competitiveness Rankings, established in 1989, incorporate 235 indicators from each of the 63 ranked economies.

“Every year, the UAE makes a new achievement in the way towards global competitiveness. Today, it joins the top five nations in one of the world’s most competitiveness references,” said Mohammad Abdullah Al Gergawi, Minister of Cabinet Affairs and the Future and Chairman of FCSA Board. 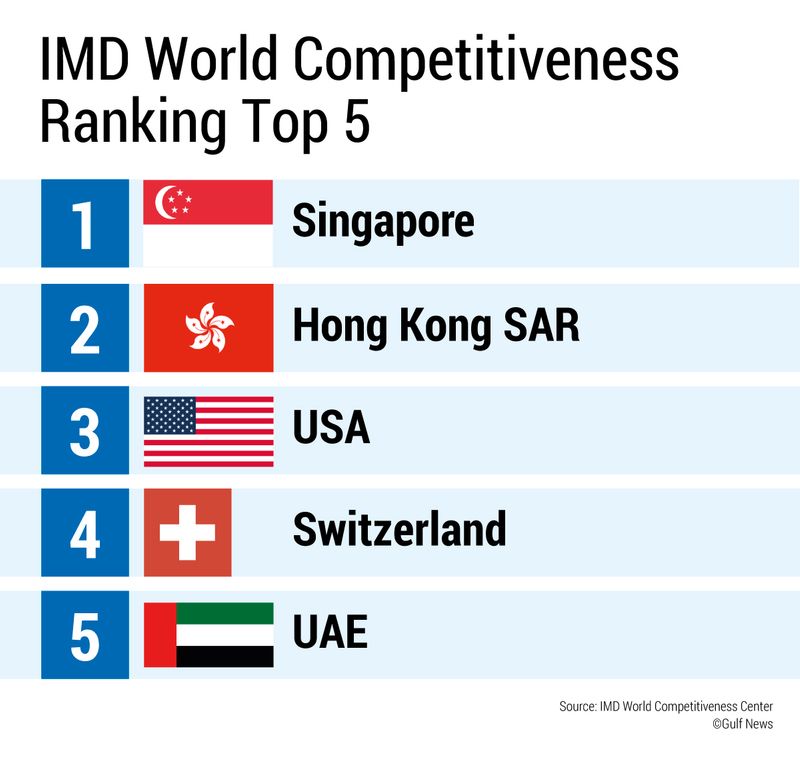 The UAE’s achievement follows continues improvement in the IMD global competitiveness ranking for the past several years.

“Today, countries of the world are impressed by the comprehensive development strategy adopted by the UAE government- under the vision of the wise leadership- which is based on sustainable investment in national competencies, bolstering the culture of competitiveness and innovation in the government work and continuous modernisation of the economic and business environment and the society in accordance with the latest advanced technologies and best global practices,” said Al Gergawi.

IMD officials said one of the main factors driving the advancement of the UAE to the 5th position this year has been an important increase in government efficiency, particularly in terms of business legislation.

“Indicators like the number of days needed to start-up a new business and the number of procedures to comply with showed impressive improvements. For instance, the average number of days to start-up a business has halved between 2018 to 2019 (from 8.5 to 4 days). This reduction in the weight of bureaucracy paired with the dynamism of the economy can be important attractiveness factors for new FDI inflows to the UAE in the next years,” said Christos Cabolis, Chief Economic and Head of Operations at the Competitiveness Centre at IMD business School.

The steadily rising global performance of the UAE is driven by both government and business efficiency, as well as technological and scientific infrastructure. All these improvements in business efficiency are expected to bring benefits in terms of economic growth and new employment opportunities to the economy of the UAE.

“Indeed, more productive, digitally-oriented and dynamic companies can compete more easily on global markets and therefore they can generate higher profits and more jobs. Furthermore, additional benefits in terms of GDP growth in next years will probably come also from the reduction of bureaucratic procedures for businesses and the recently-announced initiatives such as permanent residency and long-term visas for expatriates,” said Cabolis.

The ranking takes into account a wide range of “hard” statistics such as unemployment, GDP and government spending on health and education, as well as “soft” data from an Executive Opinion Survey covering topics such as social cohesion, globalisation and corruption.

“The areas where the UAE can further improve upon are its technological infrastructure, scientific resources and environmental sustainability. For instance, further progresses can be achieved with respect to the internet bandwidth speed, in the attraction and investments on R&D personnel, in reducing CO2 emissions and increasing energy production from renewable sources,” said Cabolis.

Oil exporters such as UAE and Saudi Arabia climbed the rankings, while inflation had a negative impact on countries such as Turkey (51st) and Jordan (57th).

Saudi Arabia achieved the biggest climb in the global rankings, up 13 places to 26th, despite a fall in its overall economic performance score. It registered the highest global ranking for investment in education and fared well in public and business finance.

The effects of rising fuel prices influenced the ranking, with inflation reducing competitiveness in some countries. Stronger trade revenues helped oil and gas producers such as this year’s biggest climber Saudi Arabia, which jumped 13 places.

In the global ranking, while Singapore toppled the US to emerge number one. Hong Kong SAR held on to second place, helped by a benign tax and business policy environment and access to business finance.

The initial boost to confidence from President Donald Trump’s first wave of tax policies appears to have faded in the US, according to the ranking.

In this year’s ranking, Venezuela remains anchored to the bottom of the ranking, hit by inflation, poor access to credit and a weak economy.

Data showed competitiveness across Europe has struggled to gain ground with most economies on the decline or standing still. The Nordics, traditionally a powerhouse region for competitiveness, have failed to make significant progress this year, while ongoing uncertainty over Brexit has seen the United Kingdom fall from 20th to 23rd.

The Asia-Pacific region emerged as a beacon for competitiveness, with 11 out of 14 economies either improving or holding their ground, led by Singapore and Hong Kong SAR at top of the global chart.